The Magical Places shown in The Magic of Many are Real Places.   You can go there, too.

The Hawthorne Tree at the Hill of Uisneach
Westmeath, Ireland 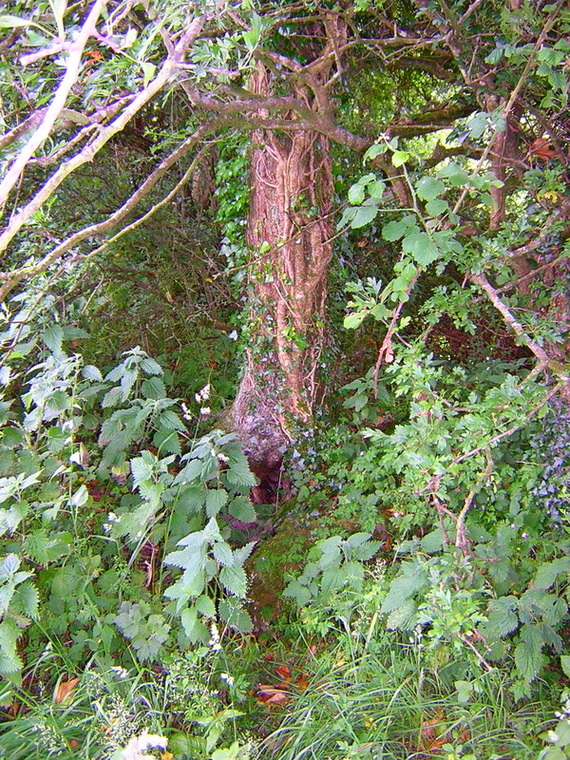 The Hill of Uisneach is an Ancient Royal Site in the very center of Ireland. All of the ancient sacred trees - the oak, the ash, and the hawthorne can be found on Uisneach. All of the rivers of Ireland flow from the sacred well on Uisneach.  Eriu, the goddess for whom Ireland (Erin in Gaelic) is named is buried under a huge monolith on Uisneach. The Hill of Uisneach is very poorly marked on the roadside and is very hard to find since the sign is tiny and very worn.

I only noticed the path and the opening at the bottom of the hawthorne when I looked at this photograph much later. Perhaps it is a door to Faerieland. 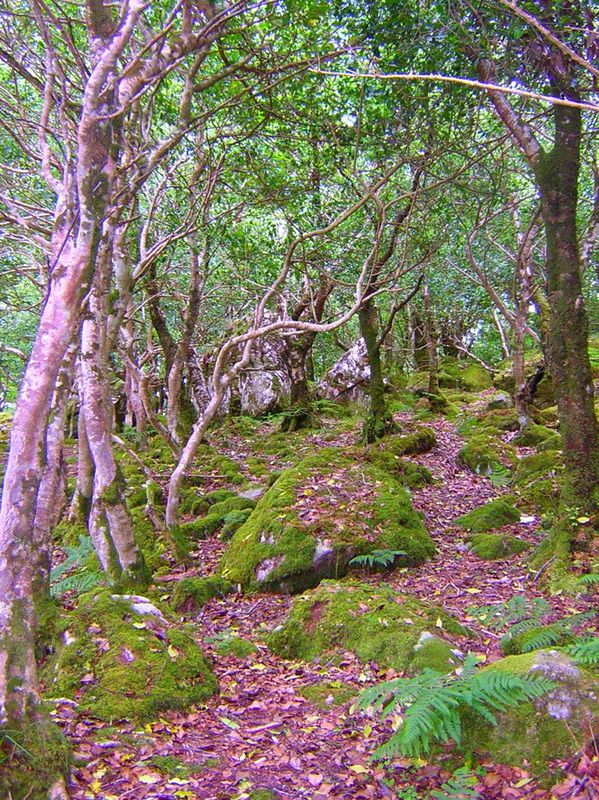 This is one of the most lush, beautiful places I have ever visited. We had stopped for tea and sweets at a rest stop on the road that goes down the Kerry Peninsula. My sweetheart had stopped to  take a picture of the lakes and mountains in the distance on the other side of the road. I walked a little farther and then around a bend in the road. This is what I found.  If faeries live anywhere, this is where they live.

Once again, I found more when I looked at the photograph. Look in the middle of the photo on the left side toward the horizon line. There's a "through the looking glass" bit of magic going on there! 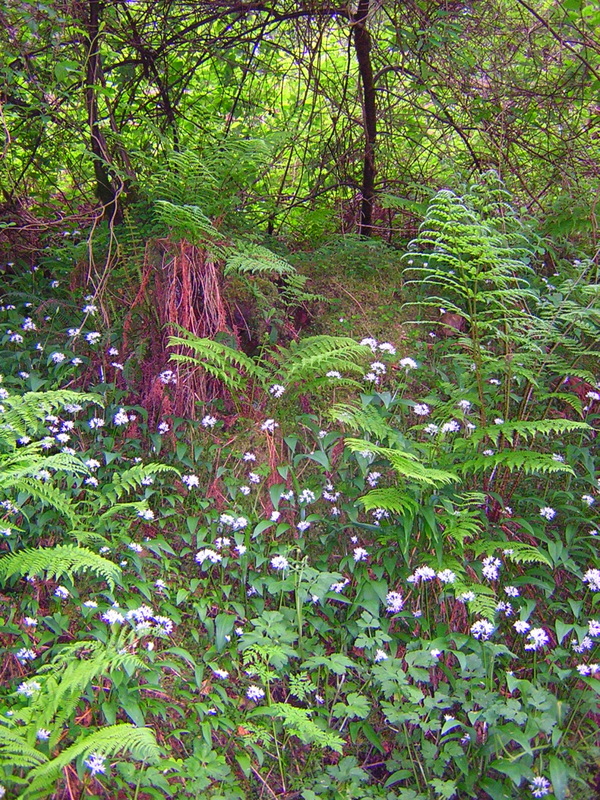 One of the most beautiful hikes I have ever taken was in Glen Ariff in County Antrim, Northern Ireland. It was a crisp, early summer day as we began the hike walking down a winding path through a field of old-fashioned wild blue hyacinths. As we began walking along a small stream and passing waterfalls, it seemed to me as if every where I looked a team of floral designers had had an outdoor competition. I have never seen such perfect floral displays in the wild. This was one of them. And once again there are faerie doors. 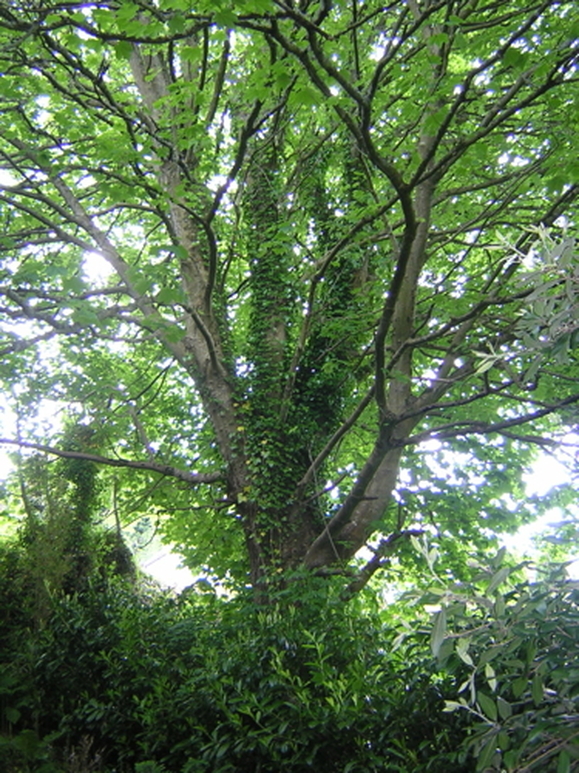 We have visited many beautiful arboretums and forests in Ireland, England, and in the US.  The Olympic Peninsula, near Seattle, Washington, I believe, is the most beautiful and the most awe-inspiring.  However, we have a book about the champion trees, the very oldest and largest, in Ireland, and regularly try to visit these. This past year we saw the oldest native tree in Ireland at St. Patrick's College in Maynooth. County Kildare. The Silken Thomas yew tree is believed to be at least 800 years old and has a girth of 14 meters.  I do not know where the magic tree shown above is, except that it is in Ireland.

Wizard Peeking Out from Tree Trunk
Above Murlough Bay, County Down, Northern Ireland 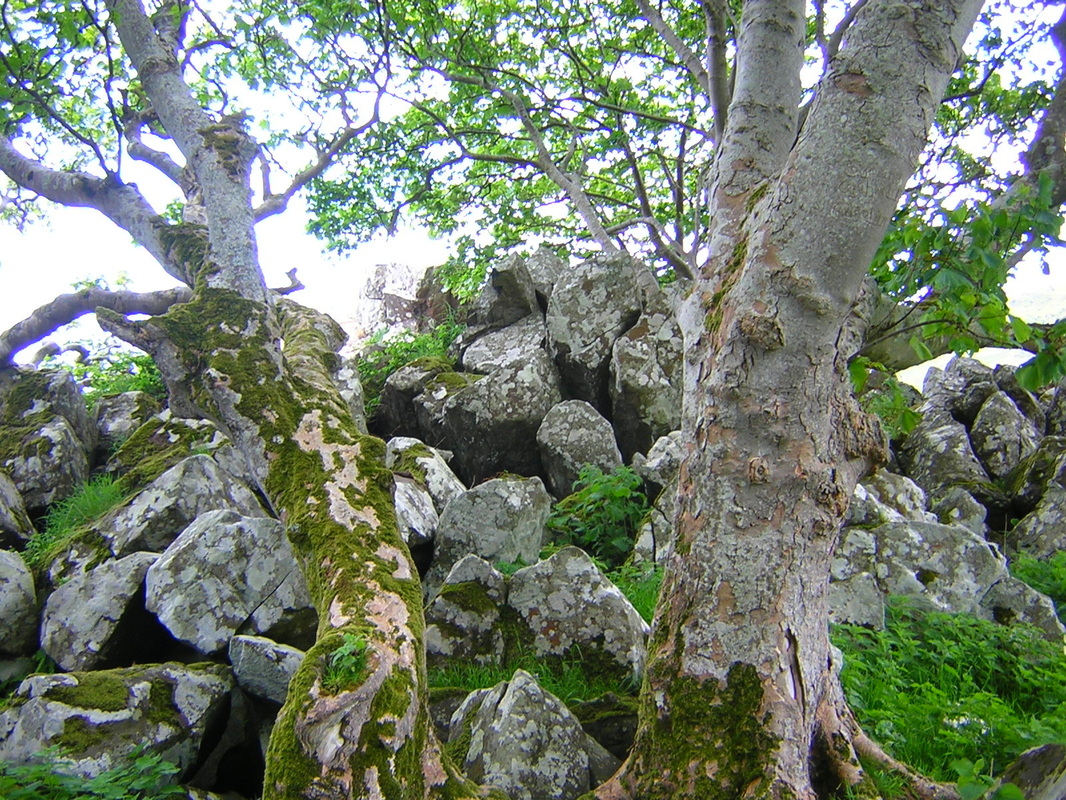 The most beautiful coastal drive I have ever taken is the drive from Murlough Bay past Tor Head in County Down, Northern Ireland. It is a tiny gravel road most of the way. The views of the Irish Sea are spectacular. The landscape is rugged and the road is rocky, so it is slow going. All along the way are faerie forts and famine cottages. The trees and rocks here are on a sea-wind-swept promontory.  Once again, I found the face in the tree only after I looked at the photograph. 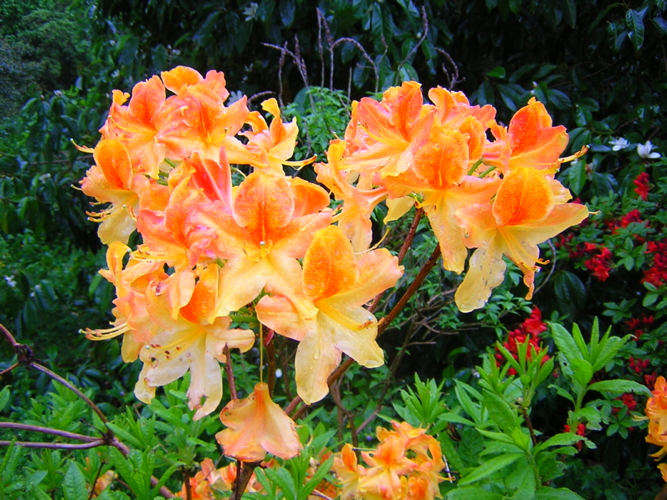 The romantic Mt. Usher Gardens and Arboretum are in Ashford, County Wicklow. This is just south of Dublin. We spent some time in Avoca (aka Ballykissangel) and visited Mt. Usher while we were there. On the Azalea Walk, the azaleas and rhododendron are enormous and are all bright colors - salmon, red, bright yellow, pink. So beautiful....  The design of the garden is influenced by the designs of William Robinson; he wrote The Wild Garden and was a strong advocate of a more natural style of gardening. The gardens are open early March to early November. If you are in Ireland in May/June, the Wicklow Gardens Festival is a not-to-be-missed event. 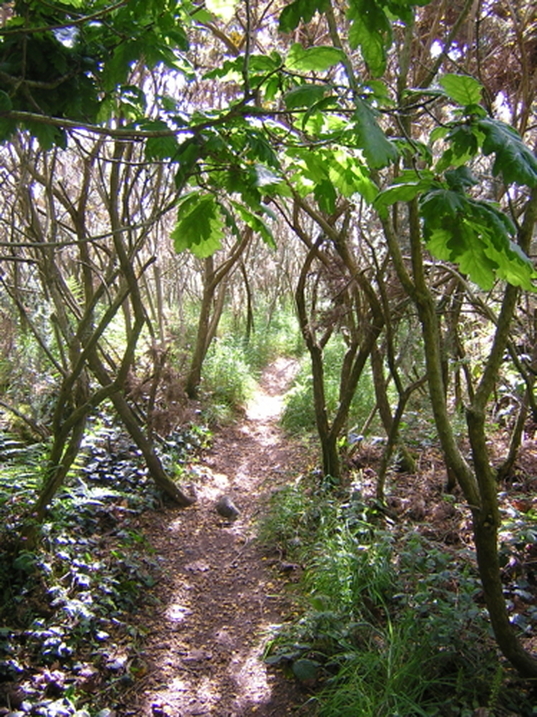 My best friend in Ireland loves walking her dog, Paddy, on Dalkey Hill. This little path heads off away from the main human and dog-walking path. It belongs to the tinier inhabitants of Dalkey Hill.
The Magic of Many, fairy tale, springtime, spring fairy tale, faerie